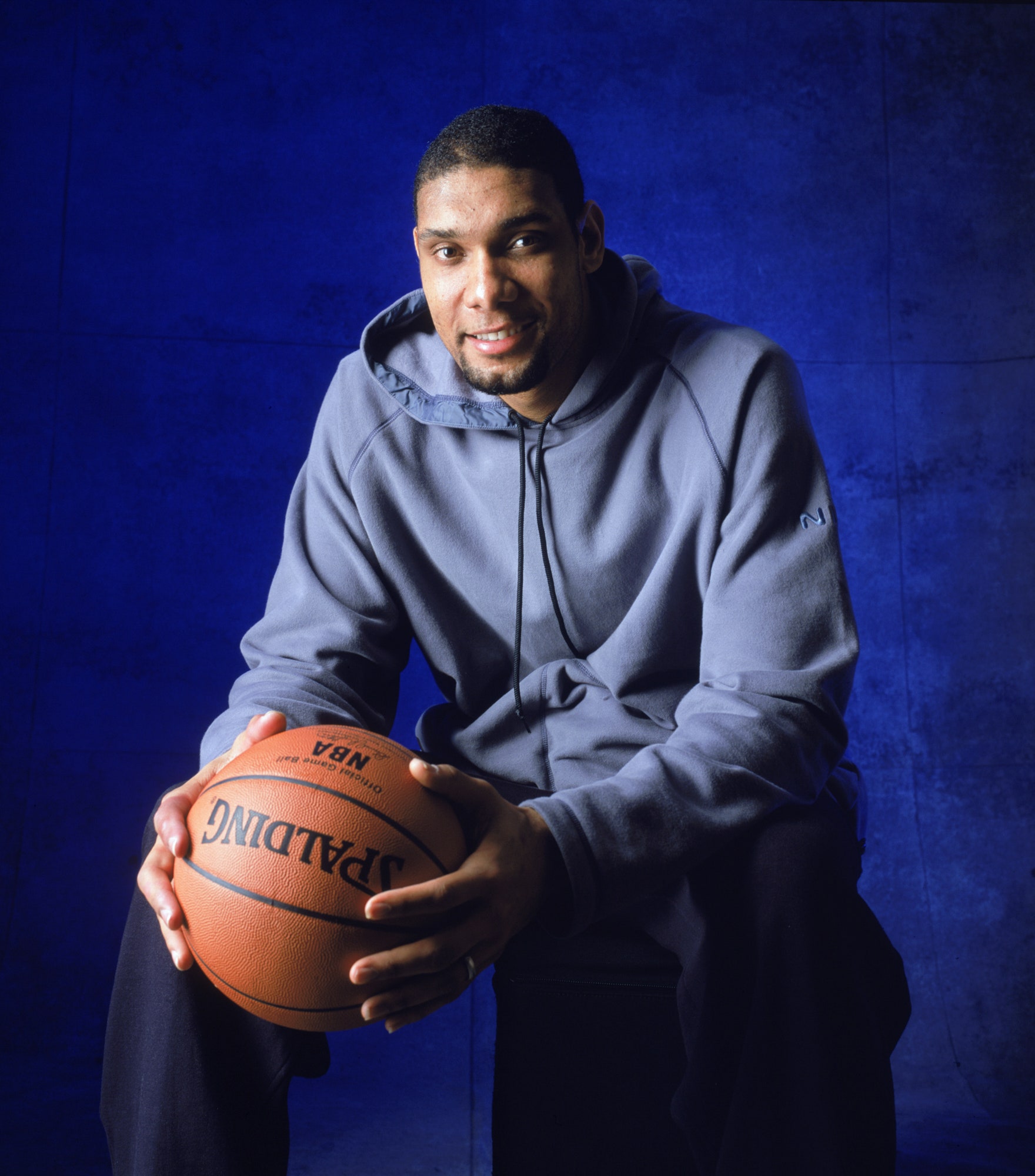 Timothy Theodore Duncan (Christiansted, US Virgin Islands, April 25, 1976) is a former professional American basketball player who served in the NBA. He played in the position of Ala-Pivô for the team of San Antonio Spurs. He is considered one of the best players of all time, for his incredible ability to execute all plays in a simple and efficient way, achieving impressive results both in attack and defense.

Tim Duncan was born and raised in Saint Croix, in the US Virgin Islands. He is the son of Ione, a professional midwife, and William Duncan, a bricklayer. He has two older sisters, Cheryl and Tricia, and an older brother, Scott, Cheryl was a swimming champion before becoming a nurse, and Tricia swam to the U.S. Virgin Islands at the 1988 Summer Olympics in Seoul.
At school, Duncan was a brilliant student and dreamed of becoming an Olympic-level swimmer like his sister Tricia. His parents supported him a lot, and Duncan excelled in swimming, becoming a teenager in the 50, 100 and 400 meters freestyle and with the goal of going to the 1992 Olympic Games as a member of the United States team.
In 1989, after Hurricane Hugo destroyed the island's only Olympic swimming pool, Duncan was forced to swim in the ocean, and his fear of sharks ruined his enthusiasm for the sport. Duncan suffered another emotional blow when his mother, suffering from breast cancer, died the day before her 14th birthday. On her deathbed, she made Duncan and her sisters promise that no matter what they would graduate from college having obtained a degree, explaining Duncan's long refusal to leave his college early for the NBA.
Initially, Duncan struggled to adapt to the game he thought would help ease his pain and frustration. Nancy Pomroy, the athletic director at St. Croix Country Day School, explains: "[Duncan] was so big. So big and tall, but it was terribly weird at the time." He overcame his embarrassment to become a highlight for St. Dunstan's Episcopal Secondary School, averaging 25 points per game as a senior. His game attracted the attention of several universities, despite starting the game only in the ninth grade.
Wake Forest University basketball coach Dave Odom, in particular, became interested in Duncan after the 16-year-old allegedly played NBA star Alonzo Mourning for a draw in a 5 on 5 game. Given the level weak from basketball in the Virgin Islands, Odom suspected Duncan at first, especially after meeting him and thinking he was inattentive; Duncan stared at Odom for most of the conversation.
However, after the first lecture, Odom understood that this was just Duncan's way of paying attention and found that he was not only a talented athlete, but also a fast learner. Eventually, despite offers of scholarships from the University of Hartford, the University of Delaware and Providence College, Duncan joined Odom's Wake Forest Demon Deacons. 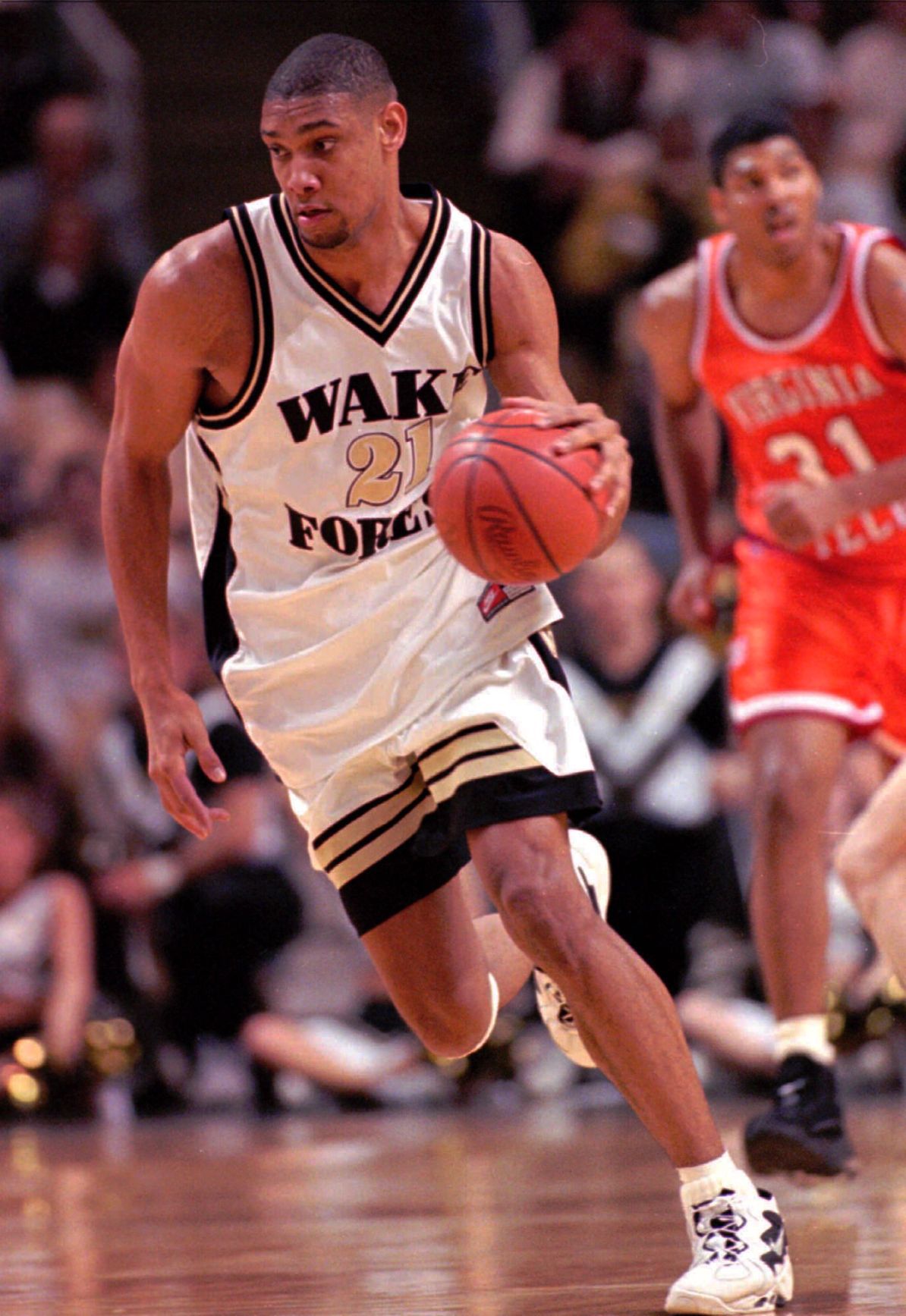 The year before Duncan arrived at Wake Forest University, the Demon Deacons reached Sweet 16, but lost top scorer Rodney Rogers, who entered the 1993 NBA draft. In the 1993-94 NCAA season, coach Dave Odom was considering redshirar Duncan, but was forced to play him after his freshman colleague Makhtar N'Diaye violated NCAA rules and ended up being transferred to Michigan.
Duncan struggled with transition problems at the beginning and even went scoreless in his first college game, but as the year went on, he and his teammate Randolph Childress led deacons to a 20-game winning and losing record -11. Duncan's style of play was simple but effective, combining a series of low-post moves, medium-range bench shots and tough defense. He was chosen to represent the United States at the 1994 Goodwill Games. Meanwhile, Duncan majored in psychology and also took classes in anthropology and Chinese literature. Despite his strong focus on basketball, the head of Wake Forest's psychology department, Deborah Best, said: "Tim was one of my most intellectual students.
In addition to his height, I couldn't distinguish him from any other student in Wake Forest. "Duncan also established his reputation as a stoic player, to the point that opponent fans insulted him as" Mr. Spock ", the prototypical logical and independent character in Star Trek.
Tim Duncan studied at Wake Forest University in North Carolina. As his mother asked on his deathbed for Duncan and as sisters to graduate from higher education, Duncan spent all four years in college, majoring in psychology while playing on the basketball team. He was chosen 3 times as the Best Player of the ACC Conference, and was elected the Best University Player in the 1997 season. 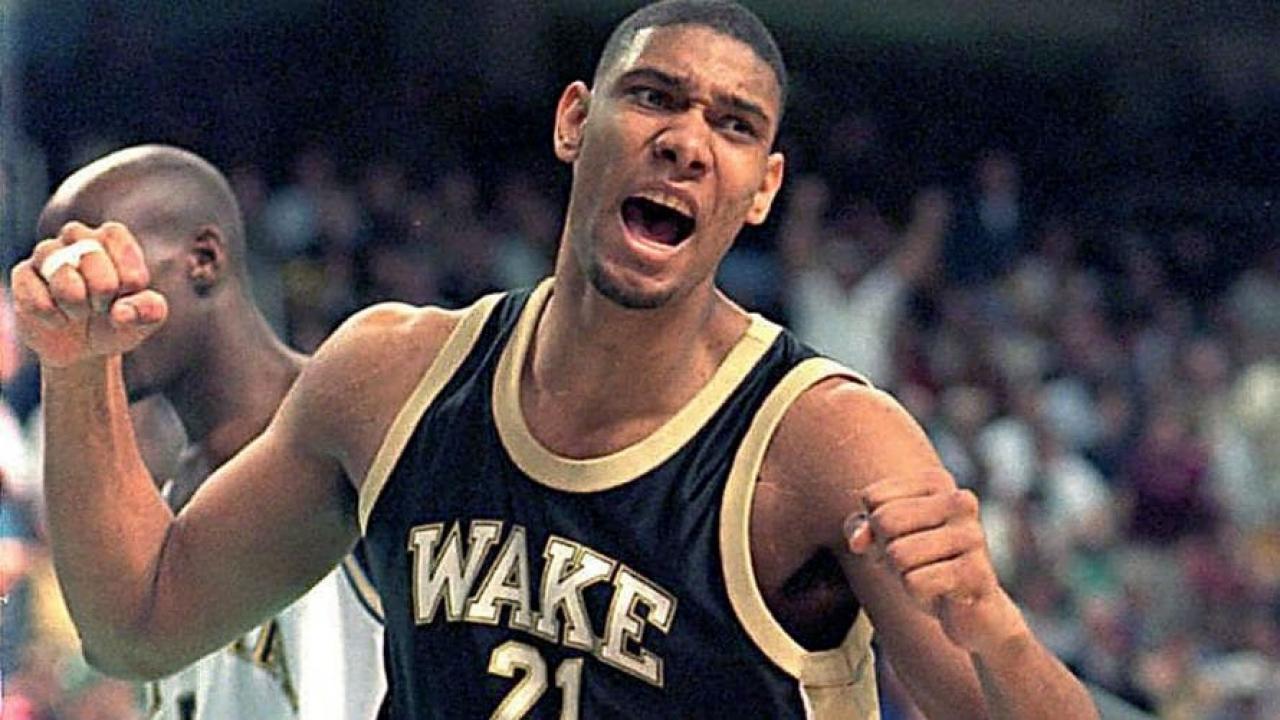 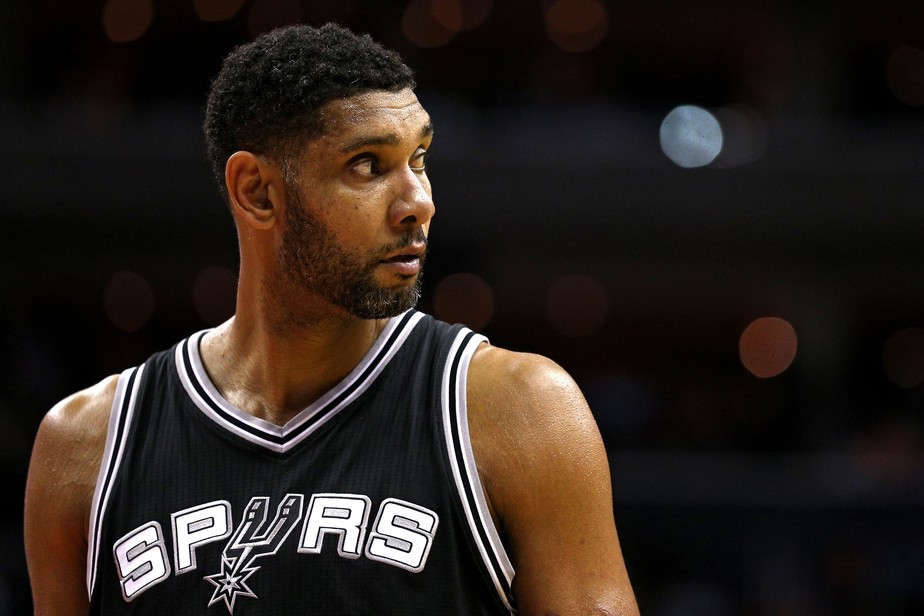 It was the first choice of the NBA Draft in 1997, by the San Antonio Spurs, and had an immediate impact on the team's success

It was the NBA's first Draft pick in 1997, for the San Antonio Spurs, and had an immediate impact on the team's success, averaging 21.10 points per game in its first season, bringing the team back into the postseason, and being chosen Rookie of the Year.
In his second season, Duncan and teammate David Robinson formed as "Twin Towers" and led the Spurs to the team's first NBA title, beating the New York Knicks in the finals.
NBA MVP (Best Player) was elected in the 2001-02 season, repeating a shot the following year, when the Spurs won the NBA title for the second time, beating the New Jersey Nets team in the final.
In 2005, Duncan no longer had a Robinson company, but together with his new colleagues Manu Ginóbili and Tony Parker, he formed a strong team and led Spurs to the NBA's third championship, this time against the previous year's champion Detroit Pistons.
Duncan has always improved his performance in the playoffs, and in Spurs' three achievements he was chosen as the NBA Finals MVP, an achievement achieved only by stars like Michael Jordan, Shaquille O'Neal, Magic Johnson and LeBron James. 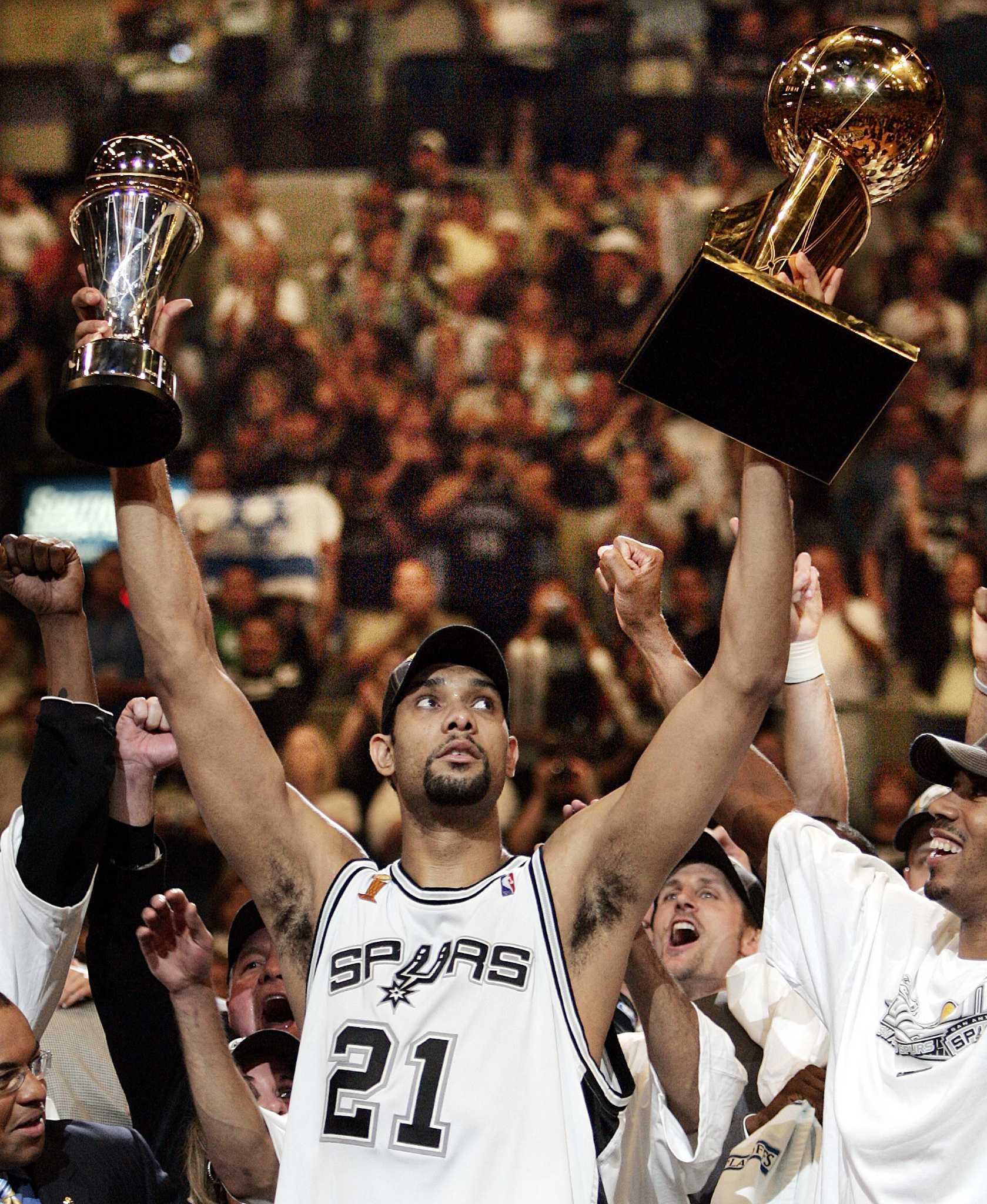 The 2006/2007 season, however, was another championship year for Duncan and the Spurs. In the playoffs, he led Spurs to a 4-1 series victory over the Denver Nuggets in the 2007 NBA Playoffs opening round, a 4-2 victory over the Phoenix Suns in the second round and a 4-1 victory against Utah Jazz in the Western Conference finals, making an appointment with the Cleveland Cavaliers in the finals. There, the Spurs defeated the Cavaliers 4-0, winning Duncan and the fourth San Antonio championship. Duncan proclaimed that that championship was "the best" of his four championships; however, he also acknowledged that he played "below average" and therefore only one vote for the NBA Finals MVP of a panel of ten.
In November 2010, in the middle of the third quarter of a game between Spurs and Jazz, Duncan after two free throws passed David Robinson as the franchise's top scorer in the NBA, as George Gervin is the biggest one joining the ABA and NBA times with 23602 points.

On December 2, 2013, Duncan became the oldest player to record a 20–20 game in NBA history, finishing with 23 points, 21 rebounds and the game-winning jump shot against the Atlanta Hawks. The Spurs went on to conclude the 2013–14 regular season with a league-best 62 wins. The Spurs defeated Dallas in seven games in the first round of the playoffs, Portland in five games in the conference semifinals, and Oklahoma City in six games, where game 6 went into overtime, as the Spurs won, 112–107.
They set up a Finals rematch against the Miami Heat, which they won, 4–1, setting a record margin for a win in the NBA Finals, for games 3 and 4. Along the way, the Duncan-Ginóbili-Parker trio broke the record for most wins in NBA playoffs history. After winning the Finals in five games, Duncan joined John Salley as the only players to win a championship in three different decades.
In July 2016, Duncan announced that he was retiring from the NBA after nineteen seasons with the Spurs. He was one of three players to have more than 1,000 regular season wins in his career, and was also the second most successful player in the league's playoff history, with 157 wins. 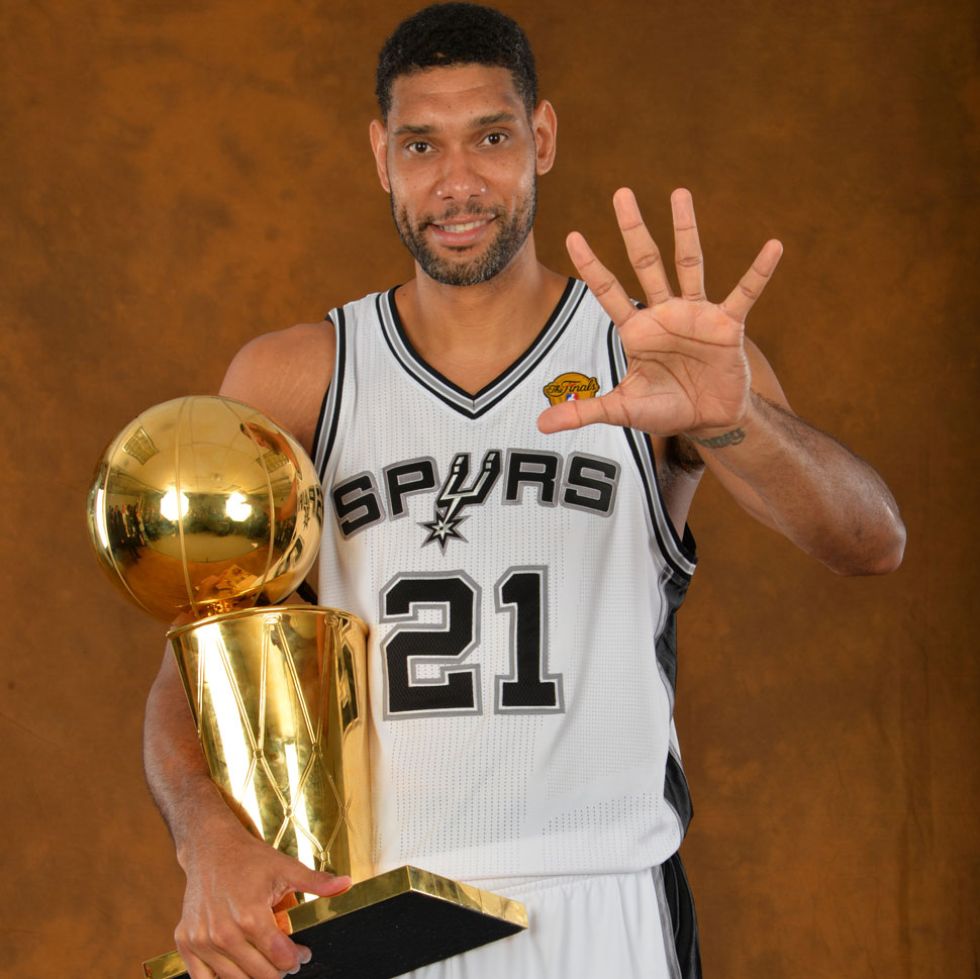 Duncan made his first appearance for the US national team in 1999. He helped qualify the team for the 2000 Olympics, but after hurting his knee he cannot go to the Games. In 2003, he qualified again for the Olympics, and was in the selection that went to the Athens Games. The American team lost three games and got the bronze, the worst result since they started sending NBA players. After the tournament, Duncan commented: "I am 95% sure that my career with FIBA ​​is over".